As Indo-China disengagement has started, the bigger question is how long the truce will last 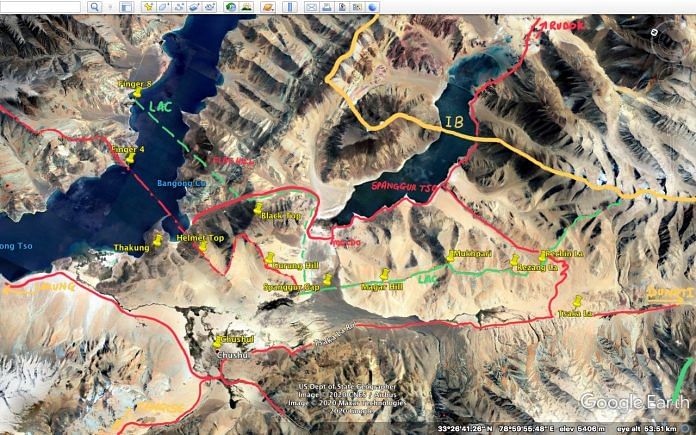 Yesterday was Amavasya and also grouping of 5 planets or rather 6 if one includes Moon also in this formation. So instead of some aggression the two arch rivals saw major deescalation process as defence minister Rajnath Singh announced in the parliament about the withdrawal of troops by both the countries in the Pangong region of Ladakh valley. Thus it was a pleasant news to read about the calibrated and coordinated disengagement of the troops that were facing each other all through the winters and earlier braving snow and wilderness but with grit and determination.

So the Chinese have tested the will power of the country and its forces pretty well this time again after Doklam face off. It is said in defence circles that this disengagement has come not out of any mercy or weakness but on pure military calculations as some time back Indian troops climbed and captured the Kailash range from where it can easily challenge the Chinese territory and could have posed bigger threats to its land and resources. On the intervening night of 29 and 30 August, the Army took proactive steps, something that we have not seen them do vis-a-vis the Chinese in a long time, and occupied the high ridgeline of the Kailash Range opposite the Chushul Bowl,  and that is when the Army, for the first time in four months, changed the status quo of the region.

There is an area of flatter terrain within the Kailash Range, which on the Chinese side is called Spanggur Gap and on the Indian side is known as the Chushul Bowl. The Chushul Bowl is very important for India, because it is from there that a road goes straight to Leh, the heartland of Ladakh. Whosoever controls the heights on the Kailash Range — from Pangong Tso to Rechin La — dominates all routes to the east and west, and forces the other side to hold defences on the next ridgeline 6-8 km away, or occupy positions of disadvantage on lower heights.

As per experts and other observers, two things have happened. One, that Spanggur Gap through which Chinese would have liked to move in and threaten India with large bodies of forces, is now hemmed in at all these heights by well-armed soldiers with very good resources. So anybody coming into the Chushul Bowl or the Spanggur Gap, then faces the wrath of fire and surveillance and everything coming in from all these directions.
Second,  the troops, units and infrastructure that the Chinese have on the south bank of Pangong Tso, can be threatened should India choose to threaten it, because it is now in the direct line of sight of these Indian troops sitting on these ridges.
Thus the Chinese might have been caught in a web of their own creation. Under normal conditions ( read any other govt other than Modi) China would have  tried and achieved what they had done in 1962, which is take these heights one by one and clear Indian forces out of there. But will the Chinese risk a firefight for that now when India has shown her resistance , determination and grit under Modi government.
Clearly Chinese would like to go back and buy more time for themselves because thee Confucius as well as Sun Tzu teaching to avoid direct confrontation when the enemy is strong.
Then there are other factors too. India has taken strong actions over Chinese goods and businesses which must have hurt the Chinese for sure. The Chinese would like have the cake and to eat it too which is rather complicated especially under the Modi govt regime.
Finally it seems that the kind of response the Chinese were expecting from Biden administration ha snot worked out in their favour. Biden has called for Quad meeting and has also spoken about the human rights and other issues in China.
Conclusion:
Amavasya is never good for worldly things and issues. In fact it is just the opposite of the materialistic world where by the spiritual side of things come to fore. Therefore any over expectations from this disengagement will be a folly. Let us therefore enjoy the day and celebrate our moral, political and diplomatic victory over the Chinese and remember the sacrifices of the 20 and other soldiers who have laid their lives for the Swabhiman of the country. The Chinese are notorious of 2 step forward and one step backward policy. They are also known for their deceit and low level tactics including sudden surprises and shocking aggression.
It will be more prudent for the country if the military as well as govt top brass utilises the time to strengthen the positions and infrastructure across the borders. There are only three outcomes from this whole thing thing. 1. China becomes numero uno surpassing United States ; 2. China slips way behind 3. China keep her status quo and wait for another day to make the killing.
Option number 1 can be ruled out at this moment as Biden is not letting down the crusade against Chinese. Therefore it will take few more years if not decades for the Chinese to fulfil their wishes.
We are of the opinion that the next two years are crucial for China and hence the region and the world. There are problems inside China for sure and their economy is also not in the pink of colours. WE expect some news coming from the Chinese side in days and months to come.
Let us wait for the right opportunity while simultaneously be alert and vigilant on the borders. That is the only way to go for it.
Dr Asheesh Shah
Samanvaya.