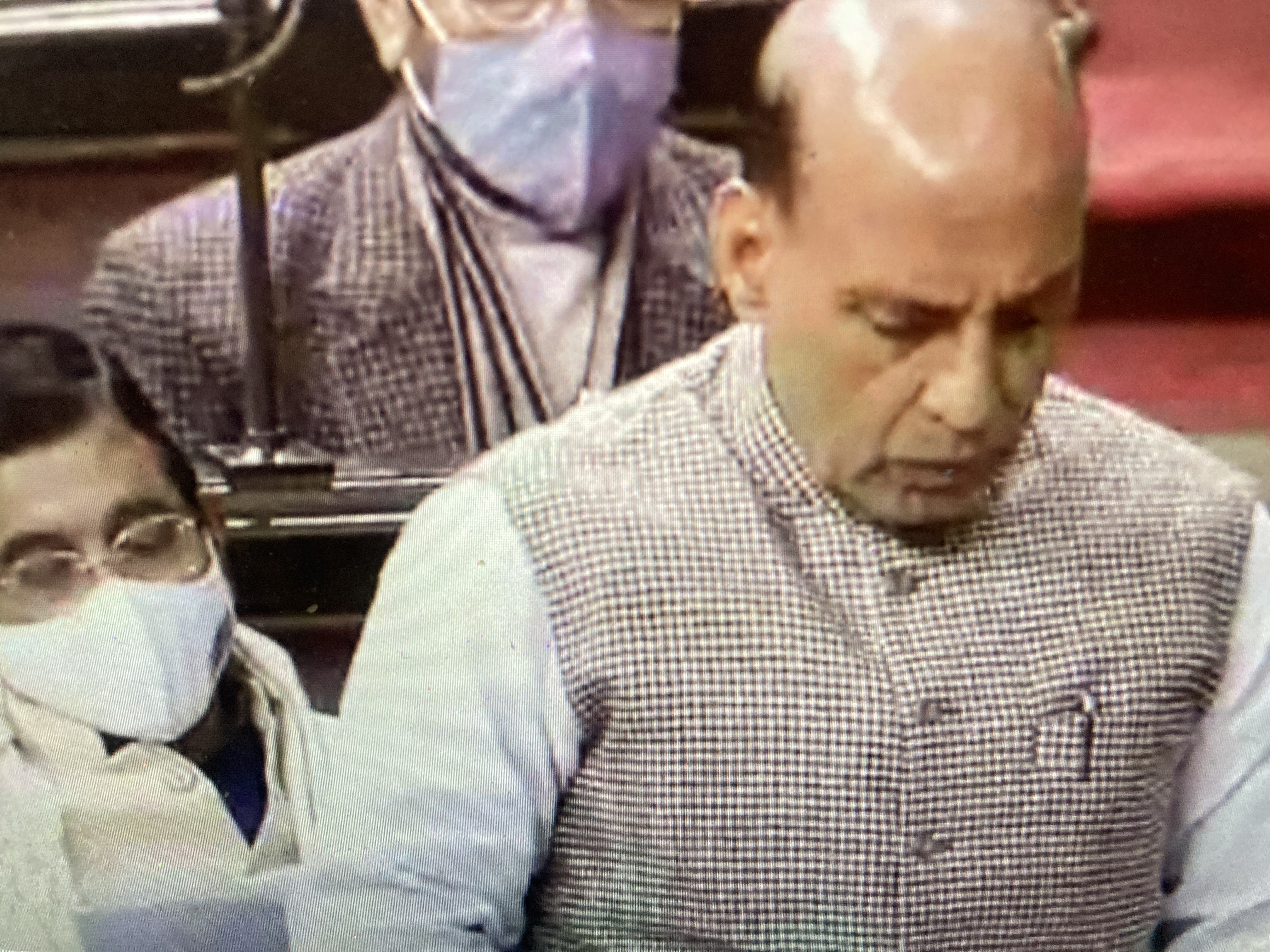 The House would recall that I had made a detailed statement on the developments in the India-China border areas in Eastern Ladakh during the last session in September last year. I had highlighted that the Chinese side had since April/May 2020 amassed large number of troops and armaments in the border areas adjacent to Eastern Ladakh. It had also made several attempts to transgress the Line of Actual Control (LAC) in various parts. These actions of the Chinese side had been detected and appropriately responded to by our armed forces. The House and the Nation had also paid homage to the brave Indian soldiers who had made the supreme sacrifice and laid down their lives in the cause of defending the territorial integrity of India. I would today like to apprise the House of certain important developments since then.

Since last September, both sides have maintained communication with each other through military and diplomatic channels.  Our objective was to effect disengagement and maintain status quo along the LAC so as to restore peace and tranquility.

Let me briefly recapitulate the main aspects of the situation on the ground. As the House is aware, China illegally occupied approximately 38,000 sq. kms in the Union Territory of Ladakh, mainly during the 1962 conflict. In addition, under the so-called Sino-Pakistan ‘Boundary Agreement’ of 1963, Pakistan illegally ceded 5,180 sq. kms. of Indian territory in Pakistan Occupied Kashmir to China. China, thus is in illegal occupation of more than 43,000 sq. kms of Indian territory. It also claims approximately 90,000 sq. kms. of Indian territory in the Eastern Sector of the India-China boundary in Arunachal Pradesh. India has never accepted this illegal occupation of our territory or the unjustified claims.

The actions by the Chinese side since last year have seriously disturbed peace and tranquility. Consequently they have also had an impact on the overall relationship. In our various high level interactions with the Chinese side, including in my own meeting with Chinese Defence Minister last September, my colleague the External Affairs Minister Shri Jaishankarji’s meeting with Chinese Foreign Minister and NSA Shri Doval’s conversation with his Chinese counterpart, we have made it clear that the foremost need was to ensure disengagement in all the friction points along the LAC in the Western Sector so as to help restore peace and tranquility.

I had apprised the House last year that there were several friction areas in Eastern Ladakh along the LAC. In addition, the Chinese side had mobilized a large number of troops and armaments along the LAC as well as in the depth areas. Our armed forces too had made adequate and effective counter deployments in these areas to ensure that India’s security interests were fully protected.

I am proud to say that our Armed Forces have responded to the challenges posed by the unilateral Chinese action and have shown valour and courage on both South and North bank of Pangong Tso. Many strategically important points were identified and our troops positioned themselves at those Hill Tops and at locations which were very important from our point of view. It is because of this great bravery of our Armed Forces in the face of harsh adverse climatic conditions that we maintained the edge. Our Armed Forces proved yet again that territorial integrity of our country remains safe in their hands and their grit and determination to safeguard our borders is unwavering.

Over the last year, we have maintained diplomatic and military engagement with the Chinese side. In these discussions, we have maintained the three key principles that determine our approach: (i) both sides should strictly respect and observe the LAC; (ii) neither side should attempt to alter the status quo unilaterally; and (iii) all agreements and understandings between the two sides must be fully abided by in their entirety.  To ensure disengagement in friction points along the LAC, it was our view that troops of both sides, who are now in close proximity, should vacate the forward deployments made in 2020 and return to the permanent and accepted bases.

Our approach and strategy for negotiations with the Chinese side has been guided at the highest level by the Hon’ble Prime Minister’s resolve that we will not give even an inch of Indian territory. Our tenacity and approach during talks have yielded results.

Since September 2020, based on the policy guidance, military and diplomatic officials of both sides have met several times to work out a mutually acceptable solution for disengagement. Till date, there have been 9 rounds of meetings of the Senior Commanders of both sides.  Diplomatic talks have continued in parallel under the Working Mechanism for Consultation and Coordination on India-China Border Affairs (WMCC).

I am happy to inform the House today that as a result of our well thought out approach and sustained talks with the Chinese side, we have now been able to reach an agreement on disengagement in the North and South Bank of the Pangong Lake. It has also been a greed to convene the next meeting of the Senior Commanders within 48 hours after the complete disengagement in the Pangong Lake area so as to address and resolve all other remaining issues.

The agreement that we have been able to reach with the Chinese side for disengagement in the Pangong lake area envisages that both sides will cease their forward deployments in a phased, coordinated and verified manner.  The Chinese side will keep its troop presence in the North Bank area to east of Finger 8.Reciprocally, the Indian troops will be based at their permanent base at Dhan Singh Thapa Post near Finger 3. A similar action would be taken in the South Bank area by both sides. These are mutual and reciprocal steps and any structures that had been built by both sides since April 2020 in both North and South Bank area will be removed and the landforms will be restored. It has also been agreed to have a temporary moratorium on military activities by both sides in the North Bank, including patrolling to the traditional areas. Patrolling will be resumed only when both sides reach an agreement in diplomatic and military talks that would be held subsequently. The implementation of this agreement has started yesterday in the North and South Bank of the Pangong Lake. It will substantially restore the situation to that existing prior to commencement of the standoff last year.

13. I want to assure this House that in these talks we have not conceded anything. The House should also know that there are still some outstanding issues with regard to deployment and patrolling at some other points along the LAC in Eastern Ladakh. These will be the focus of further discussions with the Chinese side. We have agreed that both sides should achieve complete disengagement at the earliest and abide fully by the bilateral agreements and protocols. By now, the Chinese side is also fully aware of our resolve. It is therefore our expectation that the Chinese side will work with us in full sincerity to resolve these remaining issues.

I would like this House to join me in paying gratitude to our armed forces who have shown grit and resolve under these extremely harsh climatic conditions of Ladakh which has resulted in the present agreement. Our Nation will always remember the sacrifices made by our brave soldiers which has been the foundation of this disengagement at Pangong Tso Lake.

I am confident that this entire House, irrespective of political affiliations, is united together for upholding our sovereignty, unity, territorial integrity and national security. And further, this House is one in sending out the same message demonstrating the strength and unity of our Nation to the entire world.

Watch video from Nitin Gokhale, expert on strategic issues, as he explains the Indo China disengagement