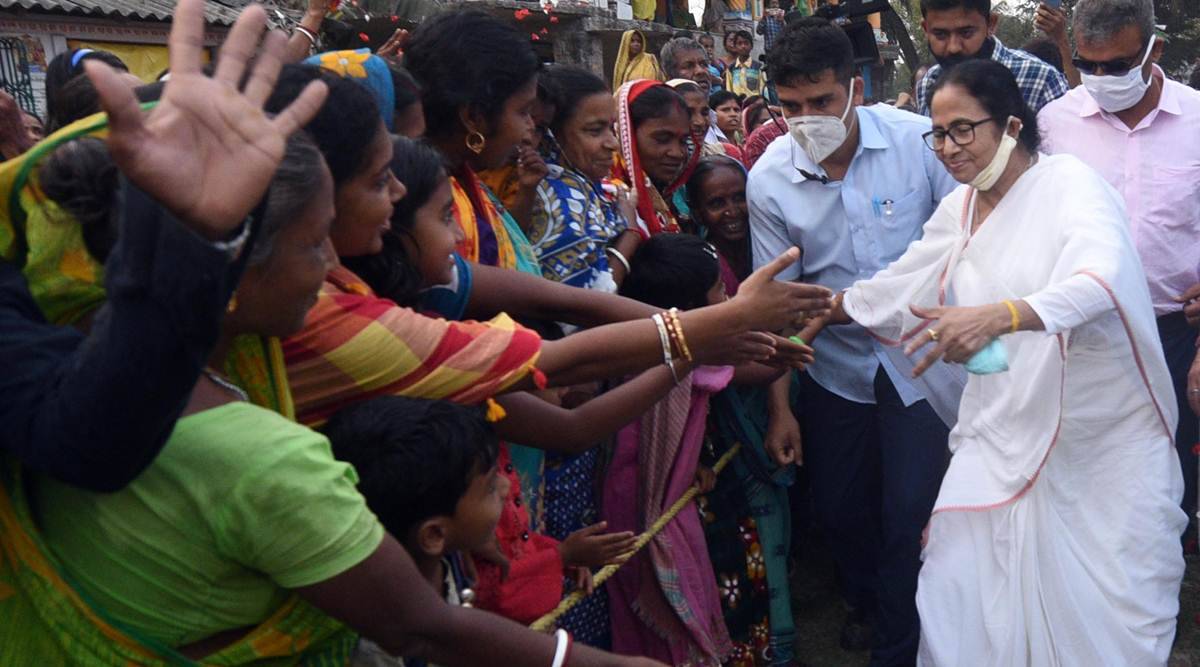 Will BJP form a government in West Bengal? PM Modi’s Brigade yatra is indeed a blockbuster, but will that be sufficient as Mamata rides high on Freebies and Minority card.

PM Modi’s recent visit to West Bengal has created a record of sorts that has also unnerved the so-called street leader Mamata Banarjee. Further the joining of renowned Bollywood actor Mithun Chakraborti  representing Bengal for past so many decades into BJP has been another shot in the arm for the saffron party. It is said that Sangh top hierarchy was involved in roping Mithun for the party. Last but not the least the number of MLAs , corporators and local cadres joining BJP is another indicator of the hope people of Bengal are seeing in PM  Modi, Amit Shah
But alas, we are looking at West Bengal where ‘local goons’ and strong party cadres matter if not more than at least in equal proportion for winning an election. West Bengal is today in the grip of unsocial elements with complete political patronage.
Besides the BJP has not been able to convince the urban voters about her resolve to give a good govt to W Bengal. While the rural voters are largely disenchanted by Mamata, that is not the case in cities. The defection of Councillors is a way to create environment in the BJP but how much will that translate in actual votes is something the BJP has to think hard.
Also during her first tenure, Mamata Banerjee had focused on improvement on the condition of roads, water supply and electricity coverage of the BPL families in particular.

By January, the BPL households in Bengal had an electricity coverage of over 90 per cent from about 18 per cent in 2011, when Mamata Banerjee took over from the Left. For the non-BPL or APL households, the coverage improved from 52 per cent to almost 98 per cent.

Mamata has also used freebies policy for her election strategy.  Reports say that before 2016 Bengal elections, about eight crore of the nine crore population of the state were getting rice at Rs 2 per kg. This time she has launched cheap food for all as her electoral stunt .

More importantly the Minority card is solid in her hands. Some 97 per cent of Muslim population was registered under the OBC category, making them entitled to quota benefits for jobs and education. More than 1 crore students from the minority community had been given scholarships.

Also, over 30 lakh girls from the economically weak community were given financial assistance under the Kanyashree scheme. Similarly, under Yuvashree scheme, about 40 lakh boys and girls were given bicycles and around 1 lakh unemployed were given assistance of Rs 1,500 per month.

In December 2020, Banerjee announced a three per cent hike in the dearness allowance for the state government employees effective from January 2021. There are around 10 lakh employees in the West Bengal government.

Between October and December 2020, the Mamata government reduced the cost of RT-PCR test for Covid-19 to less than half as the coronavirus pandemic eased in the state. It was first reduced from Rs 2,250 to 1,250 and then to Rs 950.

Earlier, the Mamata government distributed raincoats, shoes and school bags to students across Bengal as she aimed at creating a positive vibe for the TMC in assembly election.

The freebies provided by Mamata Banerjee-led government may prove to be the real trump card for the TMC in the Bengal polls and the ultimate challenge for the BJP and the Congress-Left jote (alliance) this time around just like 2016 election.

Despite being on a stick wicket Mamata Banarjee has is playing well her cards. She knows her strengths an weaknesses well. Unless there is a strong under current that we fail to observe she may very well win the elections again. Merely crossing of Councillors and MLAs will not suffice. Moreover this should let BJP karyakartas into complacency just like the Delhi elections.

Both Modi and Amit Shah are master strategists. But it also depends on the feedback they receive from cadres and local leaders. Some infighting between local leadership may also play adversely for BJP.

As of now despite the euphoria one cannot say it will be a clean slide for BJP. The party will do well to address he shortcomings. Subendhu Adhikari who is fighting her will need more space to campaign in other places. Urban voters have to be mobilized through strong Social media and local volunteers campaigns. The cultural divide has to be convincingly exposed as to how Mamata has spoiled this great land of Bose and Tagore.

West Bengal will be trophy shield for BJP if it wins. But its not going to be easy. Bjp may also have to look into post election scenario in the case of no clear majority for any party.

Can IIM A close FOOD and Agro program on its own ? Autonomy of Indian premier higher education institutes under lenses !

We have failed to revive  the glory and evolved principles of Santana Dharma: We need to change our practices before we can claim ourselves to be strong and powerful